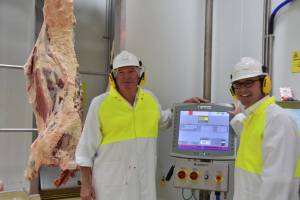 I read with interest where the minister of Agriculture, Minister David Littleproud and Teys Australia, the second largest meat processor and exporter in Australia, launched the first commercial prototype of the Dual–energy X-ray Absorptiometry (DEXA) machine into its Rockhampton plant, with initial trials to begin next month.

David Littleproud describing the machine as, ” the world’s best and we should be proud of the fact that Australian innovation created this, and this will take the industry to a new age”.

Interestingly, it had been previously stated, Dexa had been working in beef plants around the country for some time.

The first producers or processors heard of Dexa was November 2016, when Richard Norton announced, MLA was going to set up Dexa machines across the country at a cost of $150 million and this would be financed by either government or otherwise,  With  the Minister of the day giving his principle support.

It was stated back then, that Dexa was ready for commercialisation and would give all plants a unified grading system, all achievable by 2017.

At the time, ABA suggested that one machine be installed in one plant and after extensive trials were completed, then and only then, would we see the rollout continued.

In February 2017, meat processors came out strongly against a rollout, until the benefits to the industry were clear.

May 2017 saw processors and producers stating, ” they wanted more information and more trials before adoption”.

In January 2018, Teys announced they would be conducting trials on Dexa along with other technology.

My information suggests, at a forum in Rockhampton, that one leading processor was very sceptical of DEXA and very open and frank about his opinions.

To date, the whole Dexa story is a lesson in poor corporate governance.

What I have read and what others in the industry tell me, German technology, E+V video imaging machine, may be much cheaper, easier to install, taking up less space and can be purchased online.  Initial reports suggest, E+V could be more efficient than Dexa.     One advantage of E+V technology is, once the carcass is measured, this data can be download direct to producer’s phones through an app.

To my way of thinking, everybody involved, including Meat and Livestock Australia, Cattle Council Australia and the Ministers office, have a responsibility to levy paying producers and taxpayers, to explore every avenue and get it right this time.