Live shipping Standards must be Enforced!!! 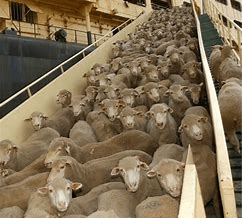 The latest crisis hitting the live shipping trade has a lot of people shaking their heads in complete confusion.   The most recent evidence of failure relates to the death of 2400 sheep, aboard the Emanuel Exports ship, on route from Fremantle to the Middle East in August 2017.

It seems that the sheep died in very poor conditions, a clear breach of International and Australian standards for the export of livestock.   Interesting to note, the exporter in question, has a history of breaching standards and yet to date, this comes without any consequences.

Animals Australia stated, “more than 4000 sheep died last year, during five routine shipments to the Middle East”.  Sadly, over the years, there has been irrefutable evidence of systemic failure, negligence, abuse and cover-ups.  One thing is certain, if animal deaths continue, then the general public will force change and eventually the industry could be phased out.

From a sheep producers point of view, live shippers are essential as most can remember having to shoot excess sheep and burying them in pits. The simple fact remains, we need live exports in both sheep and cattle.

It’s ironic that Australian producers are forced to sign a Livestock Production Assurance certificate stating, in part, that their animal welfare practices meet a certain standard.  I assume that if a producer is found guilty of negligence, then he could lose his licence to sell livestock.

On the other hand, if a producer has been found neglecting, abusing or starving their stock, then they face the wrath of the Australian judicial system, either way, the consequences are very severe and could even result in jail time.   LIVESHIPPERS however, NO PROBLEMS?

It seems to me, that we are very good at putting rules around our producers, however we are very poor at making sure that our live exports are treated humanely.  Those exporting, and processing stock have different rules and obviously, they are not enforced.

A complicated problem???? No, not really, providing everybody along the supply chain is forced to abide by the same set of rules.

As with some processing companies, cameras are set up, to ensure that animals are being treated humanely pre-slaughter.  A simple solution would be, to see the same installed aboard ships to monitor handling and conditions. Footage could possibly be relayed to a central point with any breach recorded and dealt with promptly.

If we continue to ignore these breaches and sweep problems under the carpet, then all livestock producers will suffer the ultimate consequences of greed and stupidity.