Carcass Yields – US vs Aus 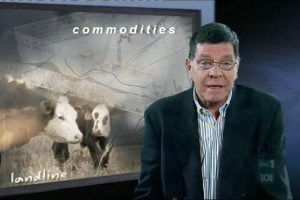 Last week, one of his quotes was from the Eastern Young Cattle Indicator (EYCI), which was down 12 cents to 708 cents.  That’s all very well, but it is not a true indicator!

I get frustrated when I hear ANYONE talking about the EYCI as an indication of cattle prices.  Because it is not!

Let me explain why:  Way back in 2007, MLA themselves quoted this to the ACCC…… “The fact is that the EYCI includes all young cattle, including those that are not suitable for processing into meat.”

This information from MLA is lavishly quoted by all and sundry, but the reality of the current market is that the highest quality processing cattle are bringing, at their very best, only $6 or less!!

Surely we producers, reporters and the MLA, should be using this more factual and targeted ‘indicator’ so as we can get what the true value of carcass beef really is.

This photo represents 2 identical animals in every way. 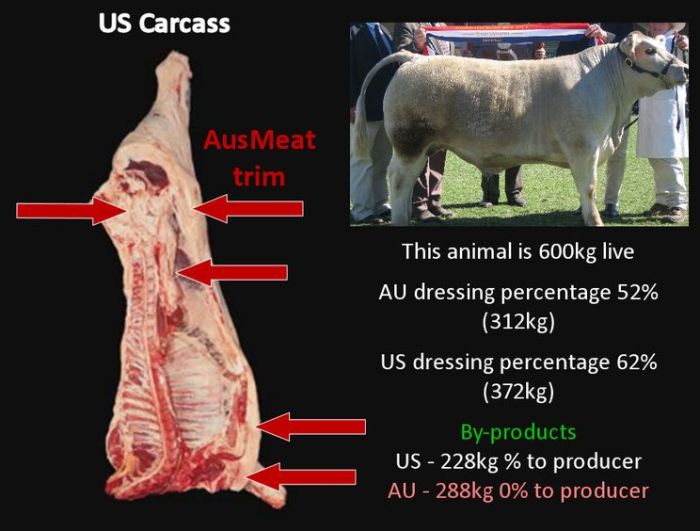 One was killed and processed in Australia under AUSMEAT Standards….with channel fat, offal, kidney fat and a sizeable trim removed prior to the scales.

The Australian animal would dress out at about 52% leaving a carcass of 312kg,  with the by-products such as the hide, head, trim , edible offal remaining the (financially valuable) property of the processor.

The second animal shown was processed in the USA, under USDA rules.   The USDA is a government department with independent graders, and operates under the transparent Stockyard and Packers Act.   This beast would have had, under USDA rules, the channel fat, udder fat, offal and trim remaining on the carcass during weighing.

So the beast in the US would dress out 62%,   allowing 372 kg of carcass beef to be paid to the producer.   Added to that, the US producer gets a percentage share of the value of the by-products.

In Australia we are told by processors that the value of offal is taken into the price that producers are paid.  Who believes that?

AusMeat/MLA should definitely be telling us what this formula is for calculating the value of the by-products (Which would actually then prove that we are getting paid EVEN LESS for the meat value of the carcase!).   It’s so secretive in Australia, yet so transparent in the USA.

On the same Landline program, Kerry presented a chart of differences between Australian and US cattle that MLA had just released.   This chart clearly showed the words “Carcass Yield”. 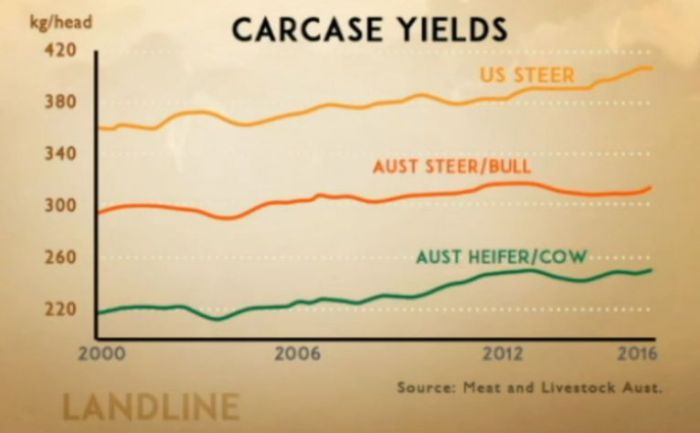 It was explained by Kerry that the US cattle have very similar genetics to ours, and the only reason for the difference (remember they are talking ‘yield’) was that the US grain fed their cattle, while Australian cattle were fed largely on grass which is free.  (Free?  Perhaps the ABC might like to read up on the cost of grass, as owning and maintaining grass lands is certainly not ‘free’).

One thing is certain, Australian  producers are kept in the dark, receive less value for their trimmed animals, and fed the wrong information, while US producers have a more financially viable cattle business than ours due to their more open and transparent systems.