How Successful has our Beef Marketing Been???

According to the MLA earlier this year, the domestic market is the single largest market in volume and value terms for Australian beef, accounting for 30% of production, and valued at an estimated $7.8Billion in 2014/15.

The significant drop in domestic beef consumption observed in 2015, as a result of the upward movement in retail prices, is expected to stabilise and in 2016 be in line with the same expectations for retail prices. Therefore domestic utilisation is expected to decline slightly in 2016.

The MLA have the results from their latest marketing campaign (you’re better on beef) advertising campaign which debuted last year. This showed that Australia’s domestic marketing beef strategy is now back on track, according MLA!? Has anybody seen this?

MLA says the campaign targets young mothers in particular and communicates how the nutritional benefits of beef make it easier for people with busy lives to overcome the challenges they face every day.

Since 1980’s AMLC and then MLA have been conducting marketing campaigns based around nutrition.

MLA says the campaign was a result of a new strategy introduced by MLA and cattle industries marketing task force 12 months ago to stem long-term decline in beef consumption. Surely this was the reason MLA created MSA in 1998, which was going to stop the decline in beef consumption according to the MSA business plan. After all the hundreds of millions of dollars spent on MSA is this an admission of the failure of MSA?

Richard Norton goes on to say that MLA’s Australia Day lamb campaigns had consistently ranked amongst Australia’s most effective and most awarded advertising campaigns.

By contrast, domestic beef marketing messages have failed to stem the gradual decline in beef consumption amongst the target market of household purchasing decision-makers.

According to Mr Norton cattle producers were benchmarking MLA’s performance on domestic beef marketing against its performance in lamb marketing and were annoyed by the lack of success of beef.

Have I missed something? One day a year on Australia Day, lamb sales boom whilst the rest of the year it continues to lose market share.  Lamb has gone from 18kg down to 8 kg since 2000.  MLA says this is a great success?!? 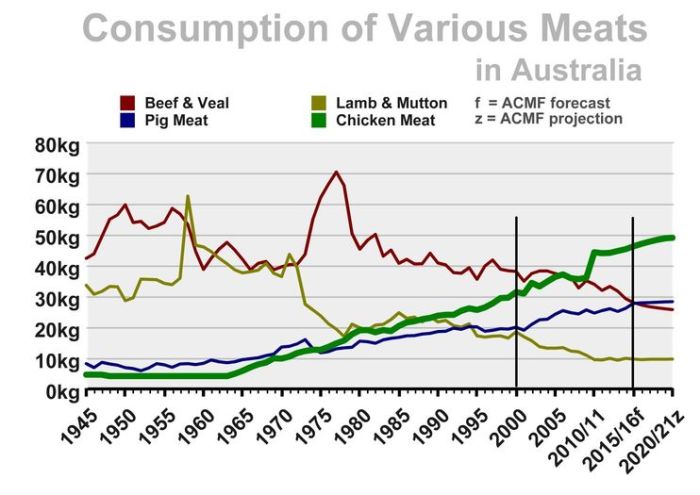 The new beef marketing campaign sought to explain to families the benefits of eating beef and how the 30 nutrients it contains can help people to overcome everyday challenges.

How anybody can draw figures like 0.17%, when Australian consumers choose through 27.6 kg of bone in beef, is beyond my comprehension.

One of the biggest problems of beef is it is still hopelessly inconsistent, despite all the hype around MSA.

Surely if we don’t get serious we should be sending mystery shoppers out and get a  series of beef cuts from a number of retailers and once collected conduct eating quality  tests along the lines of MSA testing. This would give us an indicator of what the average family can expect when purchasing MSA or any other sort of beef.

If we are serious as in industry perhaps we look at what I regard as the two most important things when purchasing beef, price and quality and conduct an independent assessment by independent people or even chicken or pork marketers. Fact is if we don’t think outside the square we are going to find that beef is going to continue to lose market share.