MSA is all about consistency and giving a return to producers. Does it measure up? NO!

In 1999 MSA was introduced to stop the long-term decline in beef consumption.

This graph shows that the capital consumption has been in a long-term decline trend since 1980. As you can see it has clearly failed, despite all the hype. 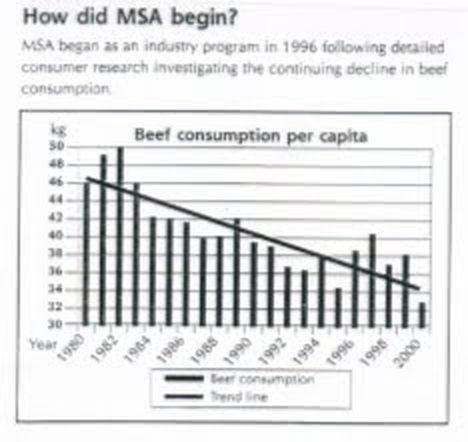 When MSA was launched we were told, as consumers and producers, that this would be a great thing for all sectors. 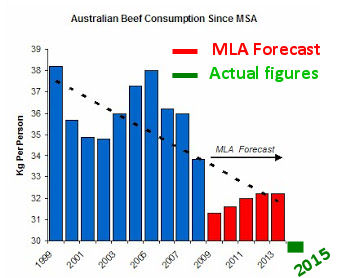 What has all this cost?

Certainly the cost of MSA would be getting towards half $1 billion while the lucky dip of inconsistency has even become worse.

By 1998 a survey of 20,000 consumers showed that 50% of ungraded meat sold on the domestic market failed to perform to eating quality standards.

When launched in 1998 we had DNA testing, MLA graders and when people tried to substitute non-MSA product they were prosecuted. I’m not certain how many people were prosecuted however the system was jealously guarded. At that time, it was a genuine system that actually performed and worked well.

I’ve always been very critical that the foundations that made such a great system have been watered down to such an extent that the whole thing leaves itself open for substitution.

During a recent shopping trip I spotted Scotch of poor quality, I wanted to have these tested along with other MSA meat sold at retail, however it appears that MLA will not sample meat from retail shelves.

The simple fact is if you’re serious about testing meat you would use mystery shoppers to collect what average consumers are purchasing. Test sampling in this way may be the only way to really find out what consumers are actually buying and if it is satisfactory.

I note that the MLA state that the Japanese will pay 3 times more for a 5 star steak compared to a 3 star.  They also go on to say that MSA is NOT a brand but a grading system!?  But the simple fact is that the 3, 4 and 5 star grades are no longer used in Australia along with DNA testing and independent graders.  So one can now buy steak that has fallen across the line because it has been put in a cryovac bag for 20 days.  On the other hand you may find yourself with a piece of beef from a prime animal that scored very well under the MSA system.

MSA is now a vastly different proposition to what it was in 1998 when launched. Now we have huge variations in eating quality and to me this is worse than no grading at all.