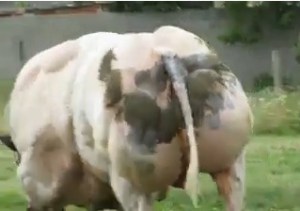 How is this for butt shape? Is this an indicator of yield? NO! Published scientific papers are very clear about butt profile, it is not an indicator of yield. There seems to be no justification for BS to be used as a discounting tool. What is the justification for processors discounting producers? (Greed). How much have practices like this cost the producers, hundreds of millions of dollars? Self-regulation simply doesn’t work 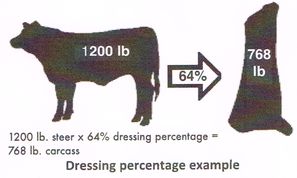 How often does a producer gain 64% dressing percentage under AusMeats?

One of the biggest problems in the Australian beef industry is the divide between processors and producers. There are many examples on how producers are continually trampled by the insatiable appetite of the processing sector, which is aided and abetted by the present set up that we have in the meat industry.When we look at the peak councils, processors have incredible power over things like the standards, when a producer sells his stock. The fact is the producer is totally in the hands of the processor and if that processor decides to impose penalties for whatever there are very few rules that cannot be manipulated.

Aus Meat was set up to be the arbitrator on what acceptable and what was not acceptable they are funded jointly by producers and processors. They have a language committee and other committees that all peak councils to have their say (great in theory hopeless in practice).Aust Meat conduct regular audits on processors, however these audits are carried out after the processor has been given notice of impending audit. Trimming before scales is a regular practice which seems to be accepted practice. Retail meat language is also of much concern prime, export quality, A grade steak list goes on , all part of these practices seems to be accepted practice.

A great example of the strength of the processors and the weakness of producers peak Council being CCA. How can one of our major processors stripping up to $150 of the value of EU carcass despite neither EU/E.U.C.A.S rules containing any basis allowing such discounts. Another example is where carcasses were judged in a national carcass competition as to be the top of the class and then the processor actually downgraded those carcasses because they didn’t meet company specifications.

The publicity over the Butt Shape discounts caused CCA to talk the talk however Ian King from AusMeat pointed out that there had been a meeting of the language committee and nobody on the committee raised any concerns. Ian King went on to point out that the place to bring up any problems was not in the press but at the committee which was set up to deal with such matters.

To my way of thinking there are numerous possibilities, however I would wonder if in fact CCA has little or no power within the AustMeat committee structure which of course is dominated by the processors. Perhaps the only way that CCA could have gone was to actually rely on publicity to get any rules changed. Whatever what we saw was huge amount of publicity which died a natural death. Now what we have seen after all the chest beating by CCA is the rules on Butt shape trimming before the scales and even retail meat identification all coming to nothing.  This is not surprising as AusMeats Language Committee is made up of 4 processors, 1 lamb producer, 1 beef producer and a pork producer.  The fact is the processors paying so little and the producer paying so much towards the upkeep of MLA and some of its offshoots results in the processors having almost complete control over the present system.

The end result of all this is processors making a fortune from some of the practices that could not stand up to basics scrutiny and even worse they are in a position to push the rules governing the industry to suit processor profits.

What is the answer?  It had been said many times in many different ways that In the middle of difficulty lays opportunity. The fact is Aus Meat started out in crisis, and like all crises, some good comes out of. Ian King says nobody really envisaged how much time and energy would have to go into changing the culture of the industry. I feel as an industry we must change the culture which seems to be hell-bent on getting stock as cheaply as possible which involves more discounts for whatever. Till this culture changes producers will continue to struggle to get a fair deal for their stock. The only way that producers can get any sort of fair deal is to have strong organisation to actually put their case and make sure that other sections industry justify their actions..

The Senate have actually identify and make recommendations to actually change the structure so as producers have a chance of getting any sort of fair deal.