The Cost of MSA

Since the start of the Senate Inquiry into grass fed levies, MLA has started talking about becoming more open and transparent.  Much of this must be credited to the new management of MLA.  Past behaviour does not make producers feel confident.

However, MLA’s answers at the Senate Inquiry made for interesting listening, and I feel ABA would have been better at answering them more definitively.

So, bearing this in mind, consider the following facts.

ABA knows that an independent evaluation of MSA in 2008 concluded that $210 million had been invested in MSA!

MLA’s Peter Barnard said it might be $210m, but a big proportion of that money was spent on MSA before MLA came into existence.   With the Meat Research Corporation spending a considerable sum of money researching, and establishing the system prior to MLA’s startup !!??

A so-called independent review conducted by the MLA in 2007 revealed that a projected $210 million investment in beef eating quality by MLA and had returned a net industry benefit of $932 million”.  And who is getting the benefit? Certainly not producers!

Notably, the review also said that the value of MSA was:   that every dollar spent on MSA would return $8 in value….to the producers!!!  ABA would like to speak with any producer now making significantly increased money on his cattle compared to what he was making before 2000!!

According to MLA information, retail premiums for MSA graded beef is up 20%, while the overall carcase value is up by 8.4% on average.  Psst:  That 8.4% relates to the carcase, not the animal sold!!

Another review goes on to say:  The value from MSA is a result of increasing demand for beef, both domestic and export.   Consumers say that they rate ‘eating satisfaction’ higher than price paid, so CIE assumes that though they’re paying more for it, they will be willing to pay a lot more on average.

However, in the domestic market, this has not proved to be the case!!  Could this instead be one of the reasons that beef consumption is dropping?  Read on.

When MSA was first established, those who supported it compared MSA to a Rolls-Royce product.  Many were angered at the cost of MSA, but we did agree that thanks to the use of independent graders, the standard of beef on the plate improved significantly.   MSA was to achieve several milestones: it was to correctly identify and grade beef for quality; this would lead to the end of beef substitution; and it was to make it easier for customers to identify and select beef quality based on their own spending and eating habits.

By 2003, when the CIE was bought in, it was obvious that MSA had been boycotted by the butchers, retailers and processors.  When MLA asked why, they were told the specifications of MSA were too tight, too expensive, and too costly to introduce in large amounts (if any) to butcher shops.

This led to the ‘ ‘sell off’ of MSA to AusMeat and the processors’ management, and ‘independent grading’ disappeared.   Most of the strict checks and balances and the 3,4 and 5 Star rating guide were watered down, or completely scrapped.  Now the ‘graded’ beef of today is just stamped ‘MSA’ only, and the boning groups 1-8 have been expanded to 1-18 which allows almost any grade of meat to get in.

What we have now is a system that bears no resemblance to what MSA started out to be. This ‘watering down’ has led to the MSA brand not guaranteeing customer satisfaction – and so MSA has failed.  The fact is, MSA has become so unreliable that some retailers and wholesalers have actually minced MSA primals.

Today, ‘MSA’ (used main by Woolworths) retail prices bring a premium over non-MSA beef which is greater than 20%. Cole’s don’t advertise MSA. They do use MSA specifications on their purchasing and slaughtering of cattle but not as branding in their shops. However, their prices are almost identical to Woolworths, who uses the MSA branding.

So what about the producer who has ‘paid’ for the introduction of the failed MSA grading plan, and who now has to continually meet regulatory standards (that is: price deductions) for age and quality, animal health, food safety, etc etc?

Now we can also join in to a plan to prove beef sustainability (at our cost); pasture fed cattle agreements (at our cost); or join a GAP (Global Animal Partnership) and be processor audited (processors say at their cost, but it will actually cost producers)….all with promises of increased premiums for producers and a better product to consumers.

Already, a Queensland processor is currently promising 70cents/kg above MSA prices for pasture fed cattle, into the USA.  (Hook, line,…..but where’s the sinker?)

This speaks volumes for the apparent (unjustifiable?) justifications given for MLA spending $210 million (or more) of producers’ funds on the implementation and development of MSA!!!   That justification included the promise that consumption of beef would definitely increase because of a system that would ensure quality,   and also that premiums would increase to producers.  Now another ‘offer’ has come along.  Will we take the bait?

Fact:  Beef consumption has dropped from ……..in 2003 to  ……..in 2013.    And where have producer returns gone?  MSA is not bringing the premiums that producers were promised;  not delivering guaranteed quality to consumers;  even worse consumption of beef is dropping. 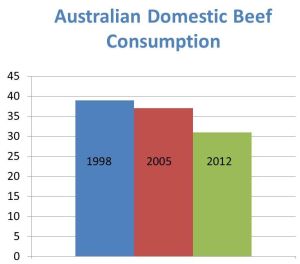 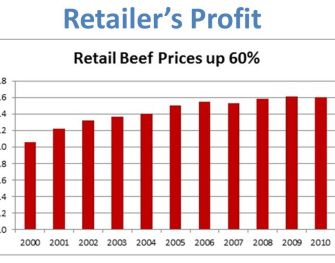 If MLA is going to become truly open and transparent they would have no problems in answering these questions.  To producers or to the Senate.

They need to admit that the grass fed dollar needs better management, that grass fed policies have gone wildly astray in cost and implementation, and that maybe they should work effectively with a strong new organisation who will help MLA to improve the earnings of the grass fed cattle producer.

After all, if the grassfed producer exits the scene, due to being priced out of the game,  MLA and its 3 other cattle related industries will suffer the same dreadful fate.

Let MSA be one expensive lesson.