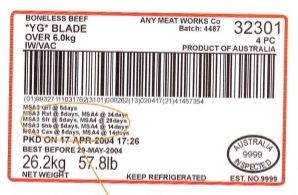 Recently there was a competition held between ‘Branded Beef’ names to find the best beef amongst them.  A panel of eight judges presided.

A thinking cattleman would suggest that a problem might arise when a processor or processors can submit carefully selected beef from their cold rooms.  Smart thing to do maybe, but in reality this is a very small sample of their total output.

One processor was quoted as saying “The quality of brands was good but the volumes under these brands represented a very small percentage of the overall output of most processors”.

When the producer sells a beast, you are paid the value based primarily on teeth, fat, bruising, meat colour, sex, temperament, and whatever else you can be discounted on. This is well known, and documented under AustMeat, which is supposed to oversee and apparently develop industry standards.  But teeth and age are the primary basis of sale.

AustMeat, as you producers will well know if you have read other TicTacs, is jointly owned by the processors and MLA.

Some facts on how your cattle were classified if MSA is not used.

If a beast is up to:

30 months and has two permanent teeth it is classed as a YG.

42 months and has seven permanent teeth is classed as a PR.

These ‘ciphers’ follow the meat when it is boxed by the processor, and is used to identify beef when it goes to the wholesaler or the retailer.

When a box of meat is stamped with a ‘Y’, the beast it came from has no permanent teeth.  On the other hand, a box containing cow rumps should have ‘A’ stamped on the box.  In many cases this is where the differentiation and discounts stop!!

When the consumer goes to buy retail meat, which has been taken from the carton and repacked for sale, it can be called prime, or any number of wonderful names.  The customer must trust the seller!

You may well ask, ‘But what about MSA?”   Doesn’t it tell you what beef quality is in that package?

A box can be marked MSA, but what does that mean?  There is no other differentiation, the wording ‘MSA’ is meant to tell it all!!!   The meat could be a piece of meat that has scraped through the 18 layers of grading at a very low score;   or another piece of meat that has scored almost double the lower grade MSA.  The truth is that MSA has been hijacked by the beef mafia which ensures that the world class grading scheme of MSA has been diluted to become a very poor indicator of top-quality meat. This allows them to sell off lower quality meat at a higher price.

Originally when MSA was developed a point system was used along with stars 3, 4 and 5 stars.  Under the original MSA system, if one was unhappy with the eating quality of meat they purchased then they could get a DNA test on that slice of beef which could then be traced back to its source.

Why would you stop DNA testing? It would be too easy to get caught substituting non-MSA meat!  This continues to lead the lucky dip of inconsistent beef, which does huge damage to beef industry.

Lamb is Lamb with no permanent teeth and people substituting mutton for Lamb had been severely dealt with in the past by having large financial penalties imposed. Same applies for cast for age laying fowls which are never sold as prime chicken.

As I said earlier, beef sold as low quality beef can then be retailed out as a top quality product.  The consumer has no idea that he is paying a premium price for a discounted product.

If we don’t get serious and start to look after consumers, consumption will continue to fall. Perhaps we could go back to the basics of MSA and also ensure that any meat being discounted by the processor carries a discount through to the consumer.

Perhaps we could even go around the retail stores with a mystery shopper and purchase two slices of Scotch from each retailer.  Then have the same judges used at Brisbane make an assessment on the meat that is bought from various retailers over the counter or through the supermarket checkout.

I won’t hold my breath as I know as most people in industry realise what will happen.