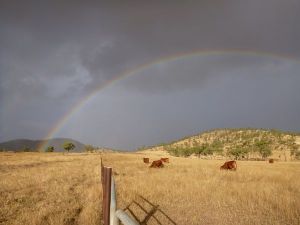 The debate over sustainable beef rages on but as yet no one is prepared to define what is “sustainable”, so in desperation I grabbed the dictionary.

SUSTAINABLE – To be able to sustain

SUSTAIN – To maintain or keep an action or process going continuously

So Sustainable Beef should be defined as being able to maintain or keep going the action or process of Beef (or grazing) going continuously? That seemed too easy for a word that seems to be troubling industries, not just beef, around the world and most beef producers I know would easily fall into that definition so maybe I should look further.

I thought I would move on to something a little more 21st century and google “sustainable”. Now phrases such as “renewing resources at a rate equal to or greater than the rate at which they are consumed.”, “without damaging the environment now or in the future” and “an attempt to merge ecology and economy into one system” are common among groups, both government and private, that are trying to define “sustainable”, but no concrete definition, more of a collection of ideas, or a collection of ideals. . . .

We are constantly told we, the beef industry, are falling behind other products throughout the world that are already “certified sustainable” so maybe they have the answer I am looking for.

After all the discussion on sustainable beef during which we are told there will be no certification cost, in a report by the WWF on CSPO, I was surprised to find the sub-heading “Cost of Certification”. Costs in US $/ha of initial certification costs ranging anywhere from $5.96 to $64.96 and with annual costs of $2.43 – $13.03.

It was, with a sense of despair for the future of agriculture if sustainability is the answer, that I find that the premium for Green Palm Book and Claim CSPO, which accounts for over 60% of CSPO, ranges from $0 – $10/MT (metric tonne), on a commodity that is currently worth $860/MT but with an approximate average over the period for which CSPO has been available of $1000/MT the premium over non CSPO is $0 – $51 or 0 – 1%.

The statement by M.R.Chandran (an advisor to RSPO) that “RSPO producers average 5.1 MT/ha, with rising fuel costs and competition from highly mechanised oil seed producers, anything less will be unprofitable by completion of the first planting cycle” was surprising, an admission that approximately half of CSPO producers are unprofitable, a long way from Ruaraidh Petre’s statement in the QCL on the 17th of April “sustainability incorporates the need for economic viability”

The RSPO web site is currently boasting the recent uptake in CSPO, a new high of 1 359 924 MT for the first quarter of 2014, that is about 14% of the estimated annual CSPO production, or slightly more than 2% of total Palm Oil production, so tiny an amount as we are led to believe consumers around the world are screaming out for sustainable products.

McDonalds and Cargill, a driving force behind sustainable beef, are only sourcing small amounts of their palm oil products from certified sustainable sources despite the oversupply of the market.

“Sustainable” leads people to believe that the practices are good for the environment but in 2009 RSPO members held 14% of Indonesian Oil Palm Concessions yet these members were responsible for 21% of deforestation that occurred in Oil Palm Concessions, a former WWF employee claims a concession to clear costs about $30 000 in bribes or campaign contributions.

But is the CSPO oil being purchased truly CSPO?  With the RSPO guidelines being released in 2005 and oil palms taking 7 years to bear fruit I would think that it is a fairly likely chance it is not, it is oil harvested from trees planted prior to 2005 which are exempt from RSPO guidelines but allowed to be marketed as CSPO.  The WWF and the RSPO have also been slow to act on members that are not following RSPO guidelines and members that are accepting Palm Oil Fresh Fruit Bunches from illegal plantations inside National Parks, but still selling CSPO, that further dilutes the whole sustainable ideal.

But it is not only vision of Sustainable Palm Oil that is a little cloudy.  The first shipment of 85 000 tons of soybeans produced under the guidelines of the RTRS came from two farms owned by the Brazilian Maggi family. In 2005 Greenpeace presented Blairo Maggi with its “Golden Chainsaw” award, an award for the person who most contributed to the Amazon destruction. This destruction gave him room for his RTRS model farms. In reality however apparently no more than 8,000 tons came from the two farms and nobody is commenting on the 77 000 tons or where it came from, a little strange for the first shipment. Certified Sustainable Soy only makes up 3% of global production.

Perhaps the MSC (Marine Stewardship Council) will hold the answer. Sustainably caught seafood is a product where demand is outstripping supply, outstripping supply to the point that critics of the MSC, which include some of its founding members, are saying they are relaxing standards in an attempt to meet demand. A report in 2012 found that 31% of MSC certified products came from fisheries that that were overfished and continued to be overfished under the internationally agreed reference points which the organization accepted. Another decision by the MSC that questions its sustainable credentials is the certification of the Canadian Long-line Swordfish boats where it is estimated that 2 sharks are killed for every Swordfish that is caught

One would think that with the demand for “Sustainable Seafood” that there is a premium for the article but I could find no such information. It is thought that MSC seafood is attracting a premium of up to $10/kg at the shops but there is no evidence of higher prices for the fisheries involved even after the certification costs of secret pre-assessments, up to $35 000, full assessments, up to $150 000 and annual audits and recertification up to $20 000.

Interestingly one market that is growing is the market to provide certification, The State of Sustainability Initiatives Review 2014 points to the fact that amount of certified producers is growing at 41% far outstripping the demand of sustainable products which is growing at 2% yet we are constantly told that consumers are demanding to know from where and how there food is produced. Other items of interest in the report are that “voluntary sustainability standards offer an important contribution to the green economy but cannot be assumed to deliver sustainable development outcomes” and “sustainability standards are declining as standards target mainstream markets”.

A concerning issue keeps arising though as I keep reading articles linked to the WWF. Their history is not as clean as you would imagine for an organization promoting an ideal. Articles linking the WWF to mercenaries and killings, displacement of 300 000 indigenous families to create a nature refuge that is a failure, displacement of indigenous families for certified sustainable plantations, not allowing members to speak out against certain sectors or businesses as it may impact on donations, receiving donations from dictators and arms dealers.

If the consumers are really demanding sustainable products let the companies supplying these consumers set standards and offer premiums, if the processes to reach these standards outweigh the premiums then they will keep buying the best products that they can and if they are looking for beef I thought the world new that Australian Graziers are among the best.

“Sustainable” cannot be defined, “Global Warming” is dead and “Climate Change” is starting to lose attention, the new word to pull at the hearts of the masses is “Sustainable”, it is an ideal.

An ideal that does little for the producers or the environment, that’s up for sale with cheques made payable to the WWF, an ideal that is up for negotiation depending on the size of that cheque, made out to an organization seriously lacking in morals and without a social conscience.