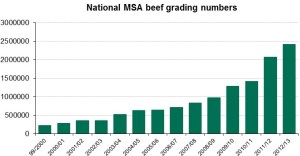 I was interested to read where MLA had announced that MSA had cracked 2.4 million head of cattle for the years 2012-13.

They go on to say growth in Australia’s world leading grading system shows no sign of slowing and more growth expected in the future.

They go to show a graph that shows fantastic growth with the real movement starting in 2004. However, as the graph shows, the program had a tough grind in its early years showing very modest growth from its launch in 1998 due to lack of interest amongst larger processors, supermarkets and many independent butchers. According to the MLA the whole existence of MSA was under jeopardy at one point, so disappointing was the industry uptake.

processors, retailers and supermarkets to adopt MSA to get where it is today.

The truth is MLA sold its soul to the greed of processors, retailers and supermarkets. Harsh, no way! The whole thing that made such a wonderful grading system was sold down the tube to get the whole thing moving.

The first thing to go was the MLA graders to be replaced by company graders who were not independent of processors. Regular DNA sampling was dropped, and then we saw boning groups expanded right up to 18 ensuring old cow beef was eligible for MSA. Stars three, four and five pertaining and giving consumers a guide were dropped. The list goes on.

Now we have meat that scraped through as a ‘boning groups’ 18 and having to stay in a cryovac for 35 days to be eligible for MSA. However, when it leaves the processing works it is sold as an MSA product with a small label saying it will be an MSA product in 35 days, it is common practice for people along the chain to ignore the 35 days; spoilage and cost make this impracticable.

The fact is the rules governing MSA have been diluted to such an extent that the whole system is nothing short of a disgrace. MLA has spent hundreds of millions of dollars to get MSA where it is. Which emphasises the fact that processors ,retailers and supermarkets rule the MLA..

If we could get a barby fired up people may realise why beef consumption continues to fall and cattle prices are so low.

ABA would like to issue a challenge whereas various boning groups of scotch fillet, which are all MSA, were cooked by a chef then blind taste tested by people attending the CCA meeting. People attending could be given cube samples of the various boning groups. This would enable them to assess their opinion from 1 to 10 depending on their experience. The ideal time to conduct such a trial would be at the CCA field day planned for September 24, 2013 in Launceston. The ABA could assist by obtaining the various MSA grades of Scotch.